The VITALIZE Podcast Presents: Off Topic, with Andrew Gazdecki and Gale Wilkinson Discussing Twitter Trends, AI as the Next Frontier, and Predictions for 2023 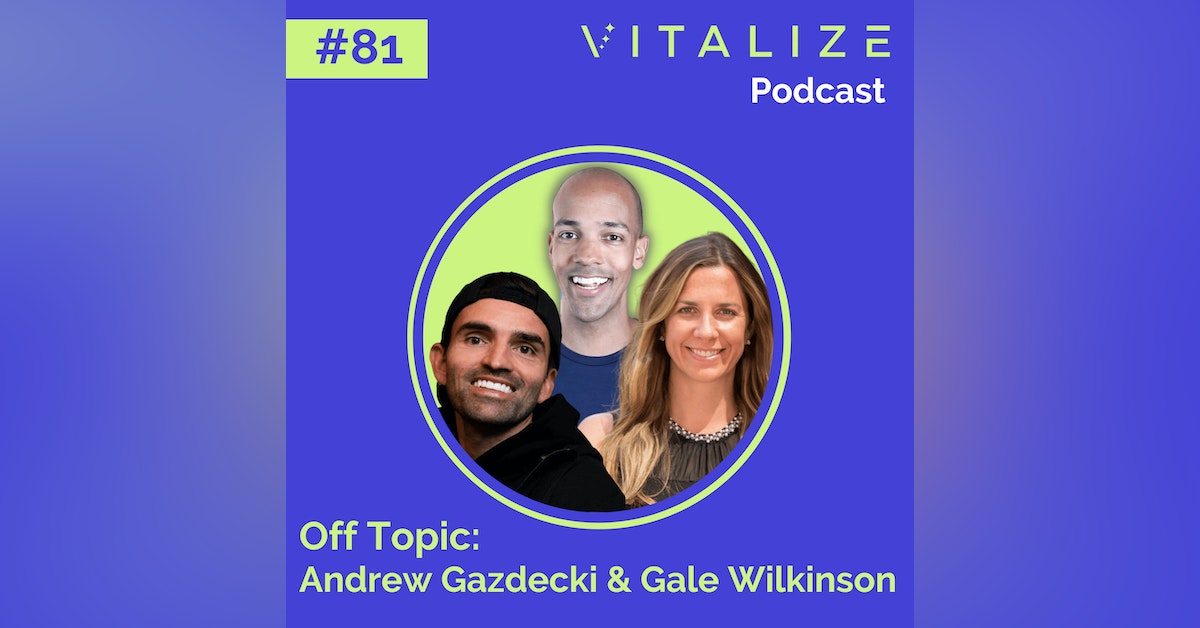 The VITALIZE Podcast presents: Off Topic, a special series where we dig into a variety of topics, trends, and current events in the startup ecosystem. In this inaugural episode of Off Topic, Justin Gordon (@justingordon212) talks with Gale Wilkinson (@gal

The VITALIZE Podcast presents: Off Topic, a special series where we dig into a variety of topics, trends, and current events in the startup ecosystem. In this inaugural episode of Off Topic, Justin Gordon (@justingordon212) talks with Gale Wilkinson (@galeforceVC) and Andrew Gazdecki (@agazdecki).

Gale is the Founder and Managing Partner at VITALIZE, a seed-stage venture fund and angel community investing in The Work Revolution. Previously, Gale founded IrishAngels, one of the largest angel groups in the world. She has led $65M+ in early-stage deals across 80+ startups. Her experience prior to VC includes founding two failed startups, consulting for new product launches with Nielsen, and strategy with Orbitz. Gale received a BBA with honors from Notre Dame and an MBA with honors from the University of Chicago Booth School of Business. She was a founding Board member of the C200 Scholars Network, and she is currently a founding Board member of Chicago Blend, an organization focused on increasing diversity in VC and startups.

Andrew Gazdecki is the Founder and CEO of Acquire (previously MicroAcquire), a founder-friendly startup acquisition marketplace. Acquire aims to consolidate the fragmented acquisition market by giving founders and entrepreneurs a single convenient marketplace to meet, coordinate, and close acquisitions. They provide free and instant access to trusted and vetted buyers with total anonymity and are on a mission to turn founder journeys into success stories and foster the next generation of entrepreneurs. They have more than 100,000 registered buyers, more than 2,000 companies listed for sale, and has facilitated more than 500 deals with a combined value of more than $200 million. Andrew has been an entrepreneur for longer than he can remember. He likes to build stuff, mostly companies, and try to tell a story that goes beyond what the company does to how it’s changing markets. Prior to founding MicroAcquire, he started two companies, Bizness Apps and Altcoin.io, both acquired. He’s been featured in NYT, Forbes, WSJ, Inc.com, and Entrepreneur Magazine, as well as prominent industry blogs such as Mashable, TechCrunch and VentureBeat.